Xalacom - eye drops, related to combined antiglaucoma drugs. The drops contain 2 active components: timolol maleate, which reduces the accumulation of moisture, watery consistency in the ciliary epithelium and latanoprost, which reduces the intraocular pressure due to the acceleration of the outflow of water accumulated. The drops act already during the first hour after the beginning of their use and maximum efficiency develops after six-eight hours. 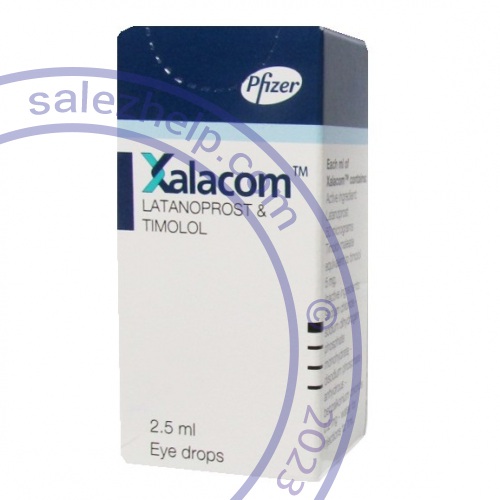 What is this medicine?

LATANOPROST belongs to a group of medicines known as prostaglandin analogues. Timolol belongs to a group of medicines known as beta-blockers. Latanoprost works by increasing the natural outﬂow of ﬂuid from the eye into the bloodstream. TIMOLOL works by slowing the formation of ﬂuid in the eye.
Timolol and Latanoprost is used to reduce the pressure in your eye if you have conditions known as open angle glaucoma or ocular hypertension. Both these conditions are linked to an increase in the pressure within your eye, eventually affecting your eyesight. Your doctor will usually prescribe you Timolol and Latanoprost when other medicines have not worked adequately.

What should I tell my health care provider before I take this medicine?

Talk to your doctor or pharmacist before using Timolol and Latanoprost if you have now or have had in the past:

Timolol and Latanoprost with food and drink

Normal meals, food or drink have no effect on when or how you should use Timolol and Latanoprost.

How should I use this medicine?

What side effects may I notice from this medicine?

The usage of brand or generic Xalacom might lead to side effects that include dry eyes and mouth, headache, irritation, itching in eyes, watery eyes and temporary blurred vision. It is advisable to seek medical help in case of any serious or prolonged side effects. Remove contact lenses before application of Latanoprost-Timolol eyes drops and do not use for the next 15 minutes. Stop usage of Xalacom and immediately seek medical attention in case of chest pain or severe allergies

Where should I keep my medicine?